WHERE IS THE TASTEST BEER IN EUROPE? 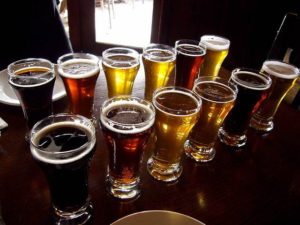 Beer is considered the most consumed beverage in the world. It is cooked almost everywhere except for only some countries: the United Arab Emirates, Saudi Arabia, Afghanistan, the Vatican, Kuwait and several others. In the rest of the world, beer is perceived, loved, prepared in large volumes and drunk in unbelievable quantities. So, at only Oktoberfest, in two weeks about 550 thousand liters of beer are drunk! But first things first.
European beer
How it all began
Today’s variety of hop drink is impressive: about 20 thousand varieties and about 180 types of beer are produced by brewers around the world! Equally diverse are the traditions of using this drink, which are influenced by historical events, national characters and much more.
It is believed that beer was first brewed in the third century. BC. Who was the world’s first brewer, not reliably known. There are many versions, and this is not important. The main thing is that the beer has stood the test of time, it is loved, drunk and continues to improve the recipe. Mesopotamia, Ancient Egypt, and then Europe: Spain, Gaul (Germany), England – the beer spread around the world very quickly. It was especially revered where, due to the natural conditions (in the northern regions), grapes were not grown, and therefore no wine was produced.
Beer in Europe
In many European countries, beer is a national product. It is brewed in breweries, carefully preserving the traditions of production and use, they organize national holidays and festivals in honor of their best beer in the world. Whose beer is the most delicious in Europe? Austrian or German, Czech or French, and maybe English, Irish or Spanish? We foresee the answer: there are no comrades to taste and color.
And yet, by what criteria is beer rated?
The quality of beer is usually evaluated by the following indicators.
The inscription on the label. The figure indicates the density of beer (alcohol content): small, medium and high.
By color: dark and light.
On beer foam: plentiful, thick, resistant.
Smell. Beer can produce a variety of flavors: hop and slightly hop, pure and sour, fresh, yeast and even floral aroma.
Taste and aftertaste. The taste of beer is sweet, bitter, sour, salty, and the same aftertaste. The aftertaste of bitter beer lasts longer.
An ideal beer is one that contains all tastes and aftertastes that smoothly blend into one another, for example: bitter – sour – salty – sweet.
It is believed that the bitterness in the aftertaste is a sign of poor quality beer, you should feel only the taste of malt.
European beer
The best beer
Not arguing about the tastes, we name only a few places in Europe, where they produce, perhaps, the best beer in Europe.
Munich (Bavarian) beer, which is brewed according to old recipes from water, barley and hops. The best representatives of Bavarian beers are the famous Paulaner, Krombacher, Franziskaner, Oettinger, Spaten, Becks, Alt, Radeberger, Rex, etc.
Brussels beer: tart, with natural fermentation. Of the 600 beers produced in the country, Lambic occupies a special place, the rest are boiled based on it with various additives: cherries, bananas and the like (Stella Artois, Beck’s).
Amsterdam beer and the well-known Heineken today are a symbol of the capital of Holland along with tulips.
Irish beer. The best of the best is dark Guinness, Harp, and Murphy’s Stout.
Prague beer (Czech) is valued all over the world. Budweiser and Pilsner Urquell, Staropramen, Gambrinus, etc.
Austrian beer Dunkel.
Danish beer Tuborg, Carlsberg.
Spanish Cerveza.
French Biere de garde and Kronenbourg 1664.
In the UK, the best beers are Taddy Porter, Foster‘s, Kronenbourg.
Try a healthy and tasty beer in different versions and in different countries, because the only way to understand what kind of intoxicating drink will be the best for you!